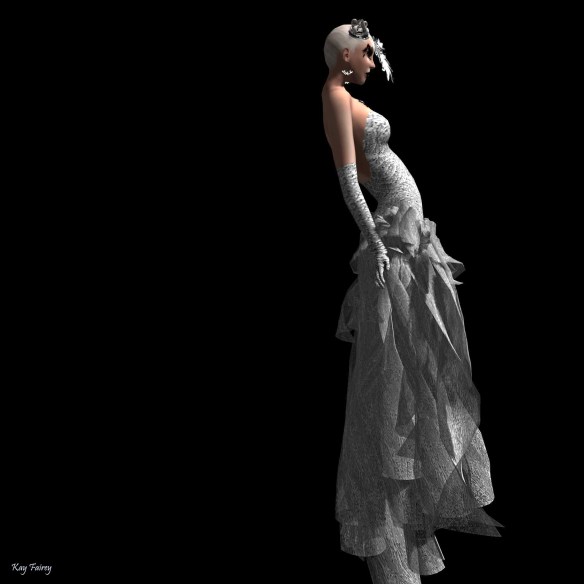 Sascha Frangilli, designer and owner of Sascha’s Designs, has just released two gorgeous gowns.  One white, called “Purity” and another black called “Tainted“.  Like most of her gowns, Sascha has included so many outfits parts that allow infinite styling possibilities.  She even includes three different pants layers and five different skirt shapes.  For the price you pay, which is very reasonable to begin with, this is so much value for your money!

Instead of blogging both gowns, I decided to try two totally different styling using the different outfit parts in the Purity set.  So here they are.

For the first look, I used the ‘split pants’ and ‘hip split swirl’ which is a half skirt that attached to the right leg, leaving the left leg bare.  I also tried a slightly fantasy look.  The Exile hairbase that I used here is an excellent hairbase set to have in your inventory as you can get a whole fatpack of different coloured hairbases for free at the Exile store.  You will find the vendor placed right in front where the new released hairs are sold.

And for the second look, I used the ‘full pants layer’, ‘skirt layer’, ‘fluffer skirt’ and ‘big collar’ in the Purity set.  The parts called ‘big collar’ is the elaborate bust hem and shoulder piece that you see in the pic below.

I took another shot just to show another top arrangement that the set allows.  Here I used a ‘stola’ instead of the ‘big collar.’  Actually the possibility is just too many and the blog post will end up way too long if I tried to show all.  But at least this will give you a glimpse of the variety of styling that is possible.

Meiling, a very popular designer in RL who originated from the Caribbean, is bringing her RL spring/summer collection into SL again!  The Creme de la Creme Shirt Dress is one from this collection and so cool that I seriously want it in RL!  I would so wear this for real!

It’s a very simple shirt dress but crisp and clean using natural fabric.  It is, however, a very avant-garde design with two huge pockets that make this dress so high fashion.  And this simplicity makes this a very versatile design to style!

Here I styled it using blue accessories with blue as the point colour.  But you can do this using any colour and of course, you can make it all white too. 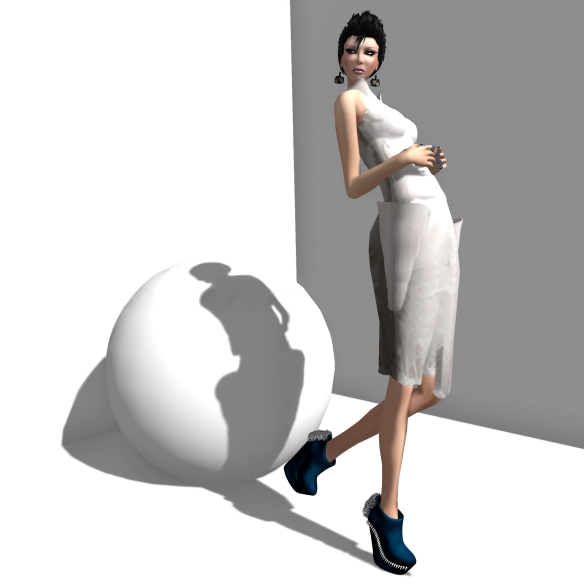 Wedge shoes with spikes from Gok in blue were a perfect match for this high fashion design and here, in order not to destroy the crisp and clean look, I used a men’s hair and makeup that uses very pale colours in hue of grey.

Clean makeup and the use of men's hair give this a very clean and sharp image. 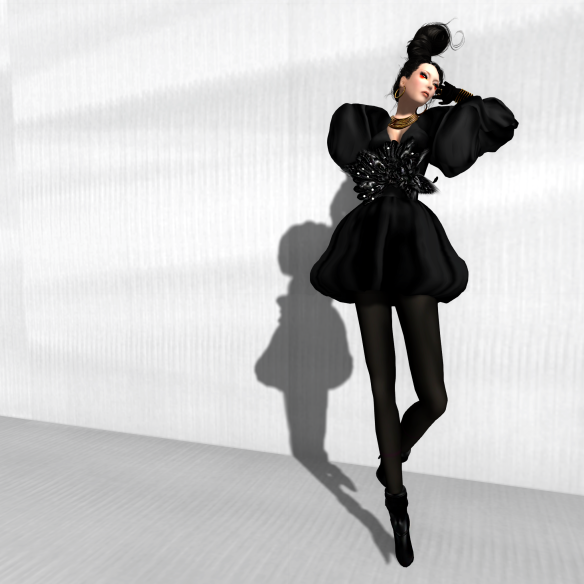 Here, I wore it with a plain black leggings and ankle boots from sYs Design.  sYs Design is well known for it’s cyber fashion items but non-cyber fashion can use a lot of what they have too.

I also wore a new jewelry set released by Kunglers from it’s Kungler Extra brand, which is their jewelry line that is sold in another building from their clothes.  The Kungler sisters are really pulling out some interesting jewelry pieces and if you are looking for some pieces with impact, this is definitely a place to check out.