Today I wore a boyish lizzard skin outfit from Giusia Creations. It’s so simple and yet the texture of the outfit is stunningly detailed as you can see from the pics I have posted.

Not only that, Giusia Ethaniel, designer and owner of Giusia Creations has given us all layers that can be imagined with and without the necklace you see here. That means you can wear it without the vest (called gilet in the set), without the necklace, vest only or in full like I did today. She even provides a jacket layer that has “everything” on it for all those changing in a hurry or those that want to be lazy without having to give it much thought.

The shirt even separates the waist up part and the lower part that comes out of the pants so you can wear the shirt tucked in if you wish.

So much freedom and so rich in texture!

I wore a skin with very light makeup, going along with the boyish theme. This skin is also her creation and gives me a cool look overall. And for shoes, I wore only the lower parts of a short ankle boots so it won’t interfere with the prim pants parts at the bottom. 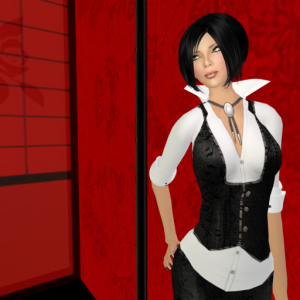 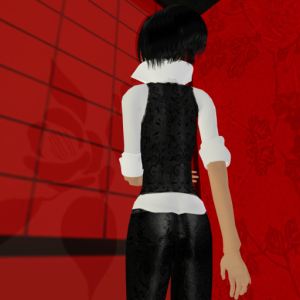