I came across a really fab store called Siryelle’s Dream which was a store I visited for the first time.  The designer, Siryelle Yalin, impressed me a lot with her very delicate designs and lovely texture.

Two new gowns were just released when I visited and I decided to buy one of the new released dresses but also one more that was not a new release but a gown that caught my eyes.  The two were so different but both very unique and great designs.

The new release, “Lady Dark“, is a boudoir type gown and I absolutely loved this outfit colour.  This gown can be worn as a gown or as a lingerie dress with a garter and stockings.  What’s unusual about this outfit is that it comes with this hair I am wearing here as part of the set. 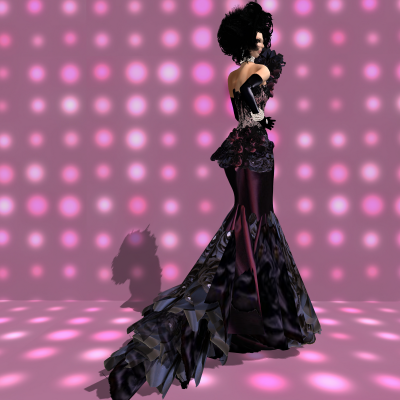 And the next one, “Orange Delight Gown“, was not a new release but nevertheless a really lovely gown.  It comes with a black top and also a matching orange top so you have an option for the top and it also comes with this lovely hat.  The flowers you see in the picture are attached to the hat and works as a great accent to this rather simple but impactful gown..

Siryelle also has some lovely boots that match her outfits which, of course, can be used with other dresses so check the store out if you haven’t yet!

The necklace and earrings I am wearing here are both from “Fairy Tale” which is a Japanese store that just had a renewal opening of the store.  The creator, xxxriexxx Serevi is one of my models in Dione Fashion Agency, but she had been a jewelry creator before she even started to model.  This jewelry set is her new release which she prepared for the renewal of her store and also has a matching circlet which I am not wearing here.  I loved this very unique design which I thought was perfect for this gown with a modern design.